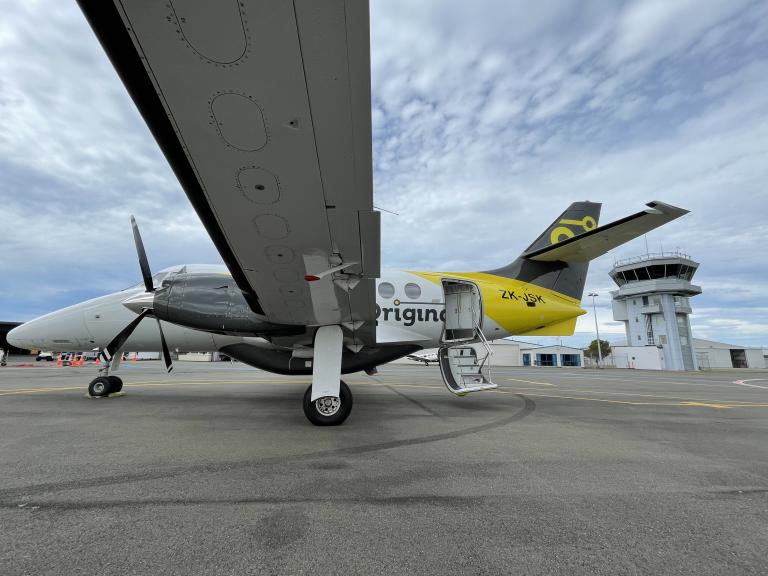 Hot on the heels of opening its redeveloped terminal, Hawke’s Bay Airport is thrilled to announce a partnership with a new airline, Originair - adding three new direct non-stop flights to and from Nelson, Palmerston North and Hamilton.

“It’s great to be opening our new terminal and have a new airline partner come onboard at the same time – this significantly steps up our breadth of services to Hawke’s Bay and incoming travellers.”

Welcoming Originair means locals can connect with friends, whanau, education or business in Hamilton, Palmerston North or Nelson in around an hour or less, when previously it could take several flights and, on occasion, up to 8 hours including stopovers to reach their destination.

“There were more than 14,0001 air ticket sales between Hawke’s Bay and the three destinations in 2019, representing a group of flyers that now have the option of getting to their destination in a fraction of the time and for less cost.”

The new destinations will also improve access to a wider catchment, including Blenheim from Nelson, Levin or Wanganui from Palmerston North, or Tauranga from Hamilton.

(1 According to IATA databases statistics )

“We’re particularly excited that Originair flights will make getting to the top of the South Island even more accessible for families travelling on a budget,” Mr Ainslie says.

Direct flights will be available to Nelson on Friday and Sunday afternoons, to allow for weekend getaways and weekday services with brief stops in Palmerston North.

Originair will offer three-weekday flights from Hawke’s Bay to Hamilton and direct Palmerston North flights on some weekday mornings and afternoons.

“Connectivity is critical for a sustainable and vibrant visitor economy, and we look forward to welcoming visitors from Nelson, Palmerston North and Hamilton over the months and years to come.”

“The launch of three new routes reflects the enduring appeal and experience offerings that Hawke’s Bay presents to all visitors – and particularly to domestic. It also reflects a confidence in our region.”

“We are New Zealand’s Food and Wine Country and Kiwis come back time and time again for another taste - whether that be visiting anywhere from Porangahau in the south to Morere in the north, doing business, attending events and conferences, relaxing, adventuring, participating in cultural endeavours, or spending time with friends and family,” Mr Saxton says.

Hawke’s Bay Airport is New Zealand’s third busiest airport in the North Island. It plays a key role in connecting the region’s people and produce with national and international markets.

Originair is a New Zealand-owned and operated airline based in Nelson, offering passenger services connecting Nelson with Palmerston North, Hamilton, Wellington and, from 17 September, Hawke’s Bay.

The airline has a fleet of three 18-seat Jetstream 31/32 regional turboprop aircraft and operates scheduled services six days per week, and charter services by arrangement. Originair’s services extend to travel by unaccompanied minors, pets and cargo.