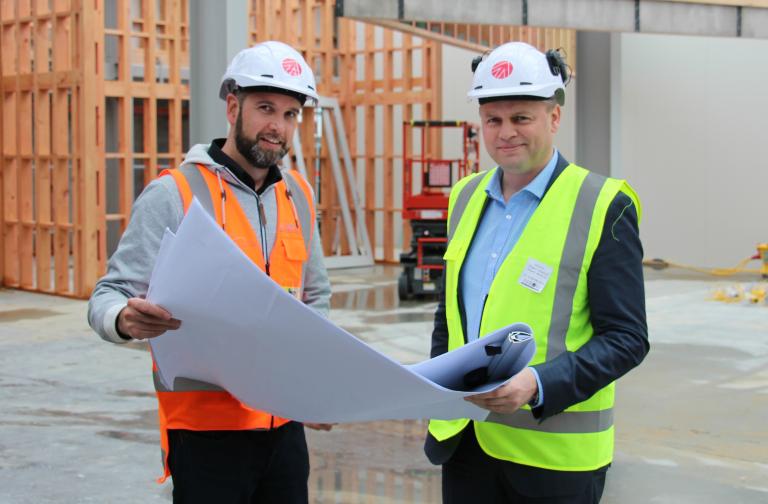 The Hawke’s Bay Airport terminal expansion has been given an upgrade, boosted by the latest passenger growth figures and the target of one million passengers by 2025.

Last September the airport announced a redevelopment of the airport terminal increasing its size from 2500m2 to 3800m2 to accommodate the growth in passenger movements and visitors to the airport.

“The airport has reported strong passenger growth and we’ve also set a target of reaching one million passengers a year by 2025. At the same time, we reviewed the proposed floorplan and amenities and have made some generous modifications.

“It’s important that we create a sense of place and that visitors get a true taste of Hawke’s Bay either by visually promoting the region within the terminal or via retail offerings of Hawke’s Bay products such as food and beverages (wine),” Mr Ainslie said.

The airport has experienced strong passenger growth with 652,000 passenger movements recorded in the financial year ending 30 June 2017. The current expansion plan was set to cater for up to 800,000 passengers, which it was initially forecasted to hit in 2024, but has since been revised to 2020.

In the last week Air New Zealand has announced an additional 12 one-way flights between Napier and Auckland, while Origin Air is introducing new flights from Napier to New Plymouth, Palmerston North and Nelson.

Mr Ainslie has been in lead roles in the redevelopment of two international airports – Darwin, Australia and Port Moresby in Papua New Guinea. He commissioned a globally reputable airport planning consultancy Airbiz to review the existing terminal and apron design in relation to the current terminal construction plans.

“Based on the current ‘busy hour’ figures we are already at the anticipated capacity for when the redeveloped airport opens, so it’s important that we add additional floor space now.

The review also highlighted that the existing facility on opening will be constrained in three key areas - baggage makeup, commercial/passenger circulation space and Aviation Security, which is highly likely to become a regulatory requirement within the next 2 -3 years.

Mr Ainslie said the revised construction additions will lift the budget by $4.5m to $20.2m and push back the full terminal completion date to the second quarter of 2020. The increased investment, funded by Hawke’s Bay Airport Limited has been approved by current shareholders Napier City Council, Hastings District Council and the Crown.

Arrow International commenced the expansion construction in January this year and the first stage, the reconfigured arrivals hall will be completed and operational by late 2018.

Arrow International’s Central Region General Manager Chris Goldsbury, says the arrivals area would open as originally planned and that although the expansion had been upgraded, it didn’t create any inefficiencies.

“The team have made great progress so far. On many major construction projects you can expect variations and it’s far better to make the changes now, rather than towards the end. Arrow have been working very closely with airport staff, the project manager and sub-contractors, so it’s business as usual.”

“There has been substantial growth in passenger numbers over recent years with Air New Zealand adding extra flights and increasing plane size and the arrival of Jetstar. We want to ensure that the airport has the capacity to meet continued growth predictions while at the same time being a welcoming and enjoyable gateway to the region,” he said.

Hastings Mayor Sandra Hazlehurst said “this is an exciting project for Hawke’s Bay and we share the airport’s vision to create the best provincial airport in New Zealand. The Hawke’s Bay Airport is being very proactive in meeting the future needs given the predicted passenger number growth and the overall growth of the region. Hastings District Council is delighted to support the new expansion plans.”

Mr Ainslie said an airport masterplan is also underway, which will safeguard the airport into the future. It will also enable the realization of new development opportunities both commercially, increased capacity by incumbent airlines and new entrants. The Master plan process will include a reasonable period for community and stakeholder engagement.

“Our vision is to be the most vibrant and successful regional airport in New Zealand. We are also very aware of our environmental role in Ahuriri and surrounding areas and it’s important that we have an active environmental management plan.

The terminal has been designed in the shape of a Kuaka (godwit) bird in flight by local architects PMA with supporting design inspiration from local artist and Mana Ahuriri representative Jacob Scott.

“It’s important that we incorporate a strong sense of place with reference to the Kuaka and reflecting the aspirations of Mana Ahuriri and Ngati Kahungunu Iwi aspirations.”

The terminal when complete will be 74 percent larger than the existing footprint and will include new airline check in areas, an automated baggage handling system, a dedicated arrivals gate, a central hospitality and retail area; new bathrooms, airline offices and an expanded Air New Zealand regional lounge. The rental car concierge area will also be relocated within the terminal.

The new entranceway to the airport at the intersection of Watchman Road, SH2 and Meeanee Quay is also close to completion and is due to open by the end of September 2018.